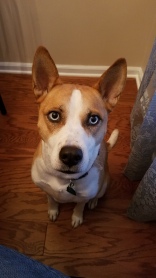 If I’ve learned anything in life, there’s one thing that’s a constant – Murphy’s Law.  With the best of intentions at heart in keeping up with blogging Kona’s daily recuperation after Day 7, the train got derailed.  Even still, for those who have been reading and trying to keep up, today is June 6!

Before I get ahead of myself, I would be remiss if I didn’t provide a quick recap.

Okay, so that’s the “Cliff Notes” version.  Now on to an “adventure”!  The other night, while taking Kona out for her final potty for the night, I noticed not one but TWO rabbits in the backyard.  SAKES ALIVE!!  Gene had Kona in his arms when she caught a glimpse of the late night snacks invading HER space and taunting her with their fluffy tails.  Gene put Kona down and left her with me.  He then went into the backyard to chase off the rabbits.  They both escaped under/through the fence, but Kona, in the meantime, went BERZERK!!!  There’s nothing quite like trying to contain an extremely powerful animal with a high prey drive, who is less than two weeks post-surgery, from wanting to go after those “wascally wabbits”.  Needless to say, we needed to break her fixated mind.  Gene picked Kona back up to get her inside.  He ended up with a battle bruise, but we had to protect Kona from herself.

Last night, she wanted so desperately to curl up with daddy, but she wasn’t allowed quite yet.  She looked so comfortable!  How can you resist that amount of sweetness?! 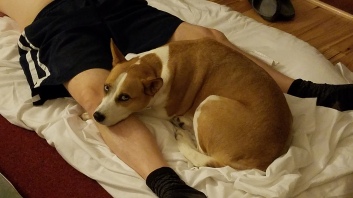 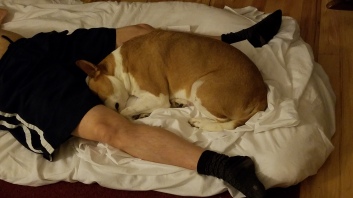 Kona received an EXCELLENT report!  The surgeon stated that most dogs at this point are putting about 20%-30% of their body weight on the leg, and that’s all that’s expected.  Kona is ahead of the curve and putting 60%-70% body weight on the leg.  Dr. Kunkel was very happy with how Kona was walking and that she had excellent range of motion.  WooHoo!!  On top of that, she no longer needs physical therapy, she no longer needs the body sling, she no longer needs her pain meds, and NO MORE “CONE OF SHAME” aka “wimple”.  We can begin to increase her food intake as well as her walking time.  Kona’s VERY happy with the latter.  Us, on the other hand…it’s a struggle to keep her contained.  Dr. Kunkel told Kona to try and “keep it to a dull roar”, to which she responded with “mwuff…mwuff”.  She so smart!!

Today, Kona experienced “life beyond the gate” (she wouldn’t make a good cloistered nun), albeit short-lived, and she’s beginning to learn to do stairs again.  Each day is one day closer to her full recovery, and one day, Kona will be free to move about the yard without us following her every move.

This is not the end, but the beginning.

One thought on “Kona’s Recuperation – Day 15”